Grind it out (#30daysofbiking)

It’s no secret that I am “mad for bikes”. As this blog grows and develops (aiming for eventual world domination) cycling will factor increasingly more into my posts.

I can’t quite pinpoint the time or place cycling first took hold of me when I was little, growing up on the Prairies of Canada, but it definitely took hold of me for good (again) two (coming up three) summers ago. It was something like a re-awakening. Besides, I had always wondered why on Earth I rode a heavy mountain bike on the straight, deadpan flat roads in the Prairies…

In 2010, I had completed a long-distance walk from London-to-Oxford, with friends, navigating the route by following the River Thames. Walking against the flow of the current felt quite apt, seeing as I trained and suffered, and got myself into the best shape I have ever been in (in recent memory), so I was grateful to be going against the flow. I blogged along the route (with the help of my iPhone) , if you’re interested. My fellow Publishing Men Together comrades and I smashed our fundraising target for a book charity that helped support literacy skills in young boys. It was after this event I bought my very first road bike.

It was a thing of beauty, moved quick, felt light and had me feeling more and more confident in myself the more I rode the 15-miles between my workplace and home. As my time on the saddle increased and the miles in my legs grew, the bike and I became inseparable. I even gave it a nick name – The Big Red Express, and would refer to it constantly on Twitter. It still serves me well, albeit it in a slightly different form (after I got knocked by a car last Fall), but Big Red still remains and you would be hard pressed to find me without it in some way.

Which leads me nicely into the current challenge I’ve taken on: 30 Days of Biking Challenge.

Bike somewhere every day for 30 days—around the block, 20 miles to work, whatever suits you—then share your adventures online…

It’s pretty straight-forward, spend every day for the month of April, ride your bike. It doesn’t matter for how long or to where, just get out and ride!!! Cycling is beautiful in its simplicity and this challenge, created by Patrick Stephenson and Zachariah Schaap takes that mantra and lives it to the fullest extent possible.

So far, so good 3 days in. Here’s brief recap of what my first three days of my challenge looked like

I couldn’t believe my luck or the weather we had this past Sunday. Having found out about a local TT taking placing and knowing a fellow member of my club was taking part, I couldn’t just sit idle and not watch. I’ve not done a TT before, but they look excruciating, and as any rider (pro or amateur) knows when it’s just you against the clock, you will dig deep and dig hard.

With a prompt start at 9am, the riders left in 1-minute intervals racing the “Long Hanborough Hilly“. 23.7 miles in total, and three laps of the circuit. With 21 riders, of all shapes and sizes I considered doing it myself but not having dressed appropriately, I decided to ride the course backwards, picking out good spots to watch the riders bend around the curves and “grind it out” up the hillsides. It certainly gave me the taste for TTs in the future, so with the idea of shedding more weight, a new bike (or two…a time trial bike would be great) and improved technique I may just be on the starting line by the end of this season!

What ended up did taking place was a lot of shouting and cheering on my part, at times I was the only spectator because at 9am in the morning, with a chilly start to boot, you won’t find many spectators (save the volunteer Marshalls) standing on the roadside. But each rider had a smile on their face as they zipped by. If that isn’t a masking of pain, I don’t know what is, but with a reverse circuit under my belt and a few pictures snapped that brought Day 1 to a close. 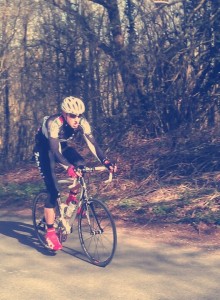 Day 2 – Not your average ride

Yesterday (Monday) was a dress-up day on my bike instead of the usual dressing into my regular cycling kit. I still managed to strap on my cycling shoes, but because I had a pretty important meeting to keep I wanted to be ready as best I could (and not arrive to the meeting tired and sweaty). Stuffing my trousers into my socks I made quite the sight as I cycled the 3.5mi to my local train station to catch my train into the city so that I could make my appointment. Again, it doesn’t matter the distance you covered, or what you wear, so long as you are on your bike it’s a win for you. A win for the planted and just maybe someone else will decide cycling is for them after seeing such a ridiculous sight. 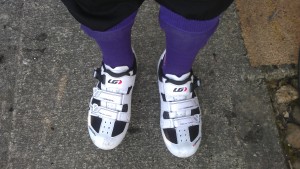 Today (Tuesday), I had to collect Big Red Express after a late night in Oxford watching a local theatre company’s production of The Odyssey. In an effort to minimize the weight of my packed bag, I zipped up and pulled on the bib shorts and rode the bus to the train to collect my bike. Funny looks galore, which are always entertaining. I love to wonder how people may be thinking of me dressed up in my garb, or potentially judging me for doing so. It’s entertaining because I don’t really care and like to have fun with it at all costs.

The way I see it, I’ll do whatever I can to get on my bike and ride. Stay tuned for further updates over the next month, I can’t promise one a day, but I’ll do my best!

Meanwhile, as Luka Bloom says “get up on yer’ bike (and pedal on!)

One thought on “Grind it out (#30daysofbiking)”

Let me know what you think! Cancel reply

What I Write About